The Royal Crescent is a residential road of 30 houses, laid out in a crescent, in the city of Bath, England. Designed by the architect John Wood the Younger and built between 1767 and 1774, it is among the greatest examples of Georgian architecture to be found in the United Kingdom and is a grade I listed building...Wood designed the great curved façade of what appears to be about 30 three storey houses with Ionic columns on a rusticated ground floor. The columns are 30 inches (76 cm) in diameter reaching 47 feet (14.3 m) and there are 114 in total, each with an entablature 5 feet (1.5 m) deep. The central house has two sets of coupled columns. Each purchaser bought a certain length of the façade, and then employed their own architect to build a house to their own specifications behind it; hence what appears to be two houses is sometimes one. This system of town planning is betrayed at the rear of the crescent: while the front is completely uniform and symmetrical, the rear is a mixture of differing roof heights, juxtapositions and fenestration. This "Queen Anne fronts and Mary-Anne backs" architecture occurs repeatedly in Bath..It was originally called just The Crescent and the adjective Royal was added at the end of the 18th century after Prince Frederick, Duke of York and Albany had lived at numbers 1 and 16...The Royal Crescent is constructed from Bath Stone is a Limestone comprising granular fragments of calcium carbonate its warm, honey colouring gives the circus and much of Bath its distinctive appearance...VIEW MORE IMAGES of Royal Crescent, Bath, England, by Architect John Wood the Younger here 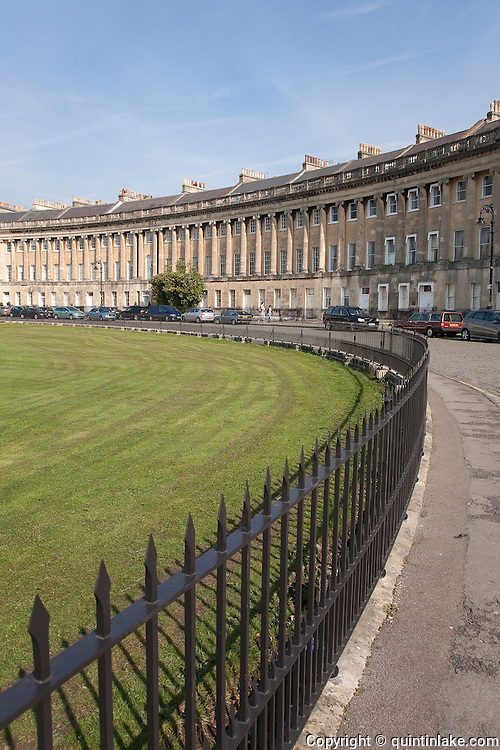